Our webstore uses cookies to offer a better user experience and we recommend you to accept their use to fully enjoy your navigation.

These yellow and dark cherry-color amber chess were made in 2010 in order to note the 150th -year anniversary of the amber mining beginning (1860-2010, the village of Pempės, Klaipėda district). These chess are exceptional because there are just two their exemplars. One of them is exhibited in the Prussian museum in Germany.

This product is no longer in stock

Notify me when available

Chess figures are made of whitish-yellow and dark-cherry amber and they are sleekly processed. The wooden base of a chess board is glued over with yellowish-white and dark-cherry color amber mosaic. On the other side of the chess, on the amber plane, there is a map, engraved with a laser. It shows the places where amber could be found in the 19th century in Klaipėda district. Industrial-business amber mining has developed namely in the village of Pempės, not so far from Priekulė (Klaipėda district) – it was probably the first place of amber mining. Purposeful searches and diggings of amber were started in the middle of the 19th century. In 1858, quite a big amount of amber was raised from the bottom of the sea when a fairway was deepened. At that time, amber was dug with steamy excavators and more thaan 500 workers have participated in this process. Since at that time the trade of amber was notably controlled, just the people who had a special license could collect the amber. Amber mining in the vicinities of Priekulė has stopped in the middle of the 6th decade of the 19th century. Amber mining business existed in Juodkrantė a little bit longer – at this place amber mining has stopped in 1890s (based on the article "Vokiečių žinios Lietuvoje", 2003; with reference to the book “Prokuls. Kirchspiel und Marktort im Memelland”,Iserlohn, 1984). 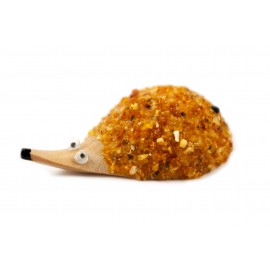